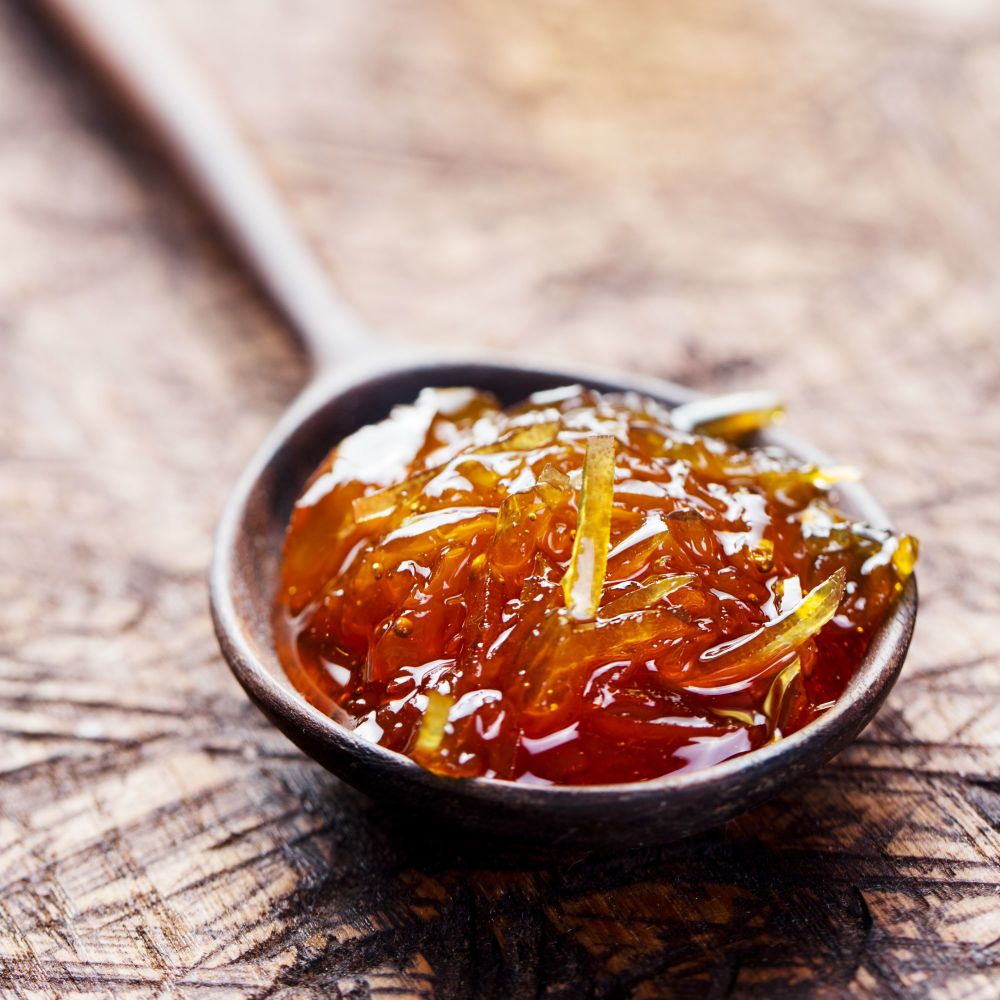 If you are already baking your own bread, then the next best thing is to have a homemade marmalade to go with it.

In this grapefruit marmalade recipe I've used grapefruit, but you can use any citrus fruit here or a mixture of different types. Grapefruit, Seville oranges (even sweet oranges are fine if you mix them with lemons or limes), tangerines, limes or lemons.

Just a word of warning, this recipe makes a huge quantity of marmalade, so if you don't need too much or you don't have a sufficiently big pot, just half the quantity of ingredients.

Scrub the fruit, remove the buttons at the top and put them whole into a preserving pan with 2.5 litres water. Bring to the boil then simmer, covered for 2-2,5 hrs or until the grapefruit skins are tender and can be easily pierced with a fork.

If you are using softer fruits, like tangerines this takes a lot less time. You will know that they are getting softer, because the fruit changes colour slightly and becomes more opaque.

When cool enough to handle, take the fruit out, or use a large spoon to take them out. Measure and keep the cooking water – you should have about 1.7 litres.

Make it up to this amount with more water if you have less or bring to the boil and reduce if you have more. The skin of grapefruits (or any citrus fruit for that matter) contains pectin, so you want to make sure you keep the water, they have boiled in.

Now, cut the grapefruits in half and remove the pips with a fork. Strain any juice from the pips back into the cooking water. Discard the pips.

After that, cut up the grapefruit peel and flesh into thick, medium or thin shreds. Put the cut-up fruit into the strained cooking liquid. Add the lemon juice and sugar and innitially on a very low heat let the sugar disolve in the liquid.

Check with the back of a wooden spoon for any sugar crystals. Once the sugar is completely dissolved, bring to the boil, stirring gently if needed.

Bring to a rolling boil (this means, that the liquid will increase in volume and bubble away) and boil rapidly until setting point is reached – about 10-15 minutes.

Test the grapefruit marmalade by putting a tea spoon full of marmalade on to a cold plate (which has been in the fridge for few hours). Leave it for a minute and try to slide your finger accross the marmalade to see whether it will wrinkle.

If it has a bit of a skin on the top and looks firm, then you are ready to go. If the marmalade is stil runny, add more heat and boil for another 5 minutes. Then do the test again.

If you wish to add any alcohol (about 2-4 table spoons of whisky work well with this recipe) or other flavouring, add them now. Be careful the alcohol will make a lot of steam.

Leave to cool for 10-12 minutes and then stir gently to disperse any scum, which often forms on the top, pour into warm, sterilised jars and seal immediately.

The original grapefruit marmalade recipe also helpfully suggests that the marmalade will last for 2 years, but in our household it never does!

HOW TO SET MARMALADE >>