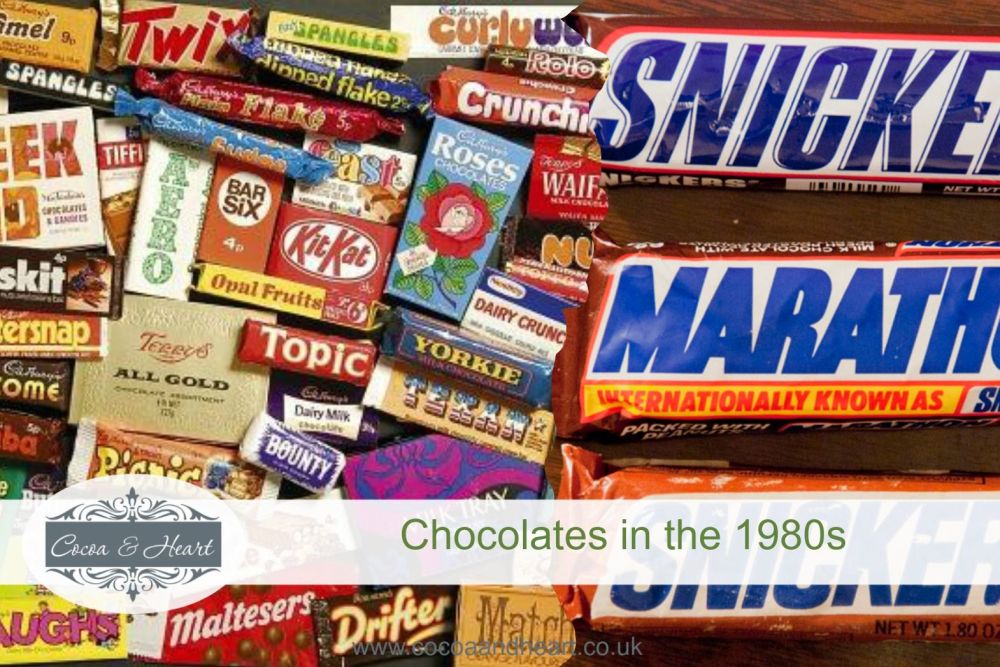 The 1980s was the decade that I grew up – from starting my teenage years at secondary school in the East Midlands to ending up working in the city – of London.  It was the Thatcherite era – of selling off big public assets, like state utilities (selling out to some people). More people started to buy shares as privatisation took hold and council house owners were suddenly able to buy their own homes.

What’s this got to do with chocolates I hear you ask. Well, everything. As an impressionable teenager, in my oversized school uniform and undone tie, I was as keen to follow the mood of the nation and earn a quick buck for myself as the next city gent in his red braces and smart pin stripe suit.

Our Catholic Comprehensive school was down the road from a corner shop. Unless you had a note from your parents, or express permission from the teachers, you weren’t allowed to go out for lunch. Some kids actually thought this was a good thing as we were surrounded by state schools for whom uniforms weren’t compulsory and whose kids were allowed out at breaks.

It was reckoned that we made easy targets on both accounts – Catholic kids in school uniforms and you soon were grateful for long cross country runs which I often won, if a group approached you out of school and looked up for a scrap. Time to scarper, proper quick.

Without a tuck shop on site for sweets, I hit on the idea of offering to sneak out at breaks and run errands for mates to bring back essential confectionary supplies. Of course, the reward for running the gauntlet of escaping the attention of the dinner ladies who patrolled the playground and the exits, was that I would get to keep the change from any purchases.

It was a thrilling adventure while it lasted – more of that later. I’d take down orders during the first break, negotiate my commission and then plan my great escape. Only unlike Steve McQueen, I was on foot and I had the double task of not only getting out of school undetected, but I then had to break back into the playground again.

I was aided in my adventure by the fact that the playground was raised and banked at the sides by trees. This meant that I could quickly run down the side and screened by the leaves, make my exit through the main gates. Sometimes, my mates would help me by deliberately kicking a football into the lane by the exit and then asking the dinner lady for permission to fetch it. If four kids suddenly rushed to retrieve the ball, only three would emerge back up the bank.

And me? I’d be off down the street to the nearest corner shop with my orders memorised in my head.

‘A Mars bar for Tim, a pack of Opal Fruits for John, two Twixes for Dave and Kevin. Anything else ... oh yes, Darren’s regular order of two Kit Kats and a Crunchie. Well, it is Friday!’

Unlike those big city hotshots, I didn’t have a filo fax or post tic notes to write it all down or remind me of my orders and commissions, so I used instead the back of one of my rough notebooks. Luckily my handwriting was so bad that no-one guessed, either the teachers or my parents, that my alpha-numeric codes weren’t algebraic equations, but rather the profits from my lunchtime ventures.

Looking back, I do recall that the Asian family who owned the corner shop did ask me once if I had permission to be out of school at lunchtime. Maybe it was when I had a particularly large order and they must have wondered what I was doing buying all these chocolates and sweets or where I got the money from.

Hang on though, this was the Eighties. People were busy making their fortunes. Scruples were for wimps. No own cared where the money came from so long as the cash tills kept ringing.

I smiled sweetly (no pun intended) and nodded and never got asked again. Of course, I still had to get back into school, undetected. Once or twice, I simply walked in through the gates with a friendly teacher who must have presumed I had permission from someone else! I found that arts and PE teachers were the most easy going and talking about the latest chart hits (Hot Chocolate!) or Saturday’s footie scores was the best way to strike up an innocuous conversation.

‘That kid Lineker, sir. Used to play on Vicky Park. Went to City Boys school, didn’t he?  Do you think he’s any good?’ An air of innocence really is the best disguise. Oh, and it helped if I managed to hide the chocolates from view as well! Having bright red Topic wrappers sticking out of my pockets would have been something of a giveaway.

Often, my school mates would help, me, by distracting the officious dinner ladies, when I was ready to rush back up the side of the bank; so like a good striker, I could time my run into the box, unnoticed.

Then of course, they could always kick the ball into the lane and I could pick it up and bring it back up the bank – telling the dinner lady, on the other side of the playground, that I was simply returning with the ball – for good measure.

This clandestine, chocolate caper must have continued for a good two or three months or so. Enough time and commissions for me to amass a sizeable schoolboy pile of coins. I kept them hidden in a glass jar behind some Roy of the Rovers Football albums and do remember asking my mum for a second jar. I mumbled something about needing it for a school chemistry experiment!

Well, it was an experiment of sorts. All the time, I was also keeping a chart of customer choices and what chocolates and sweets were the most popular.

Why did no-one ever buy Aeros? Was it just too lightweight and full of bubbles to be filling enough for hungry school kids.’

Of course, it couldn’t last. Sadly, or perhaps it was a blessing in disguise, I was caught beforeI could make one final last big job that would have paid for a season’s supply of Shoot! Magazines and Tiger and Scorcher sports comics.

I managed to dispose of my Bounty and my Curly Wurlys, leaving just a solitary and probably sweaty Picnic bar before being escorted to wait outside the Deputy Head’s office.

Being a catholic school, it catered for children whose parents were from a truly catholic range of different nationalities. Goans from East Africa, various European countries – both western (like my Spanish mum) and eastern as well as lots of kids with Irish forebears.

I was polite and well spoken, from a relatively well to do parish and doing OK in my lessons. The Deputy Head was of Irish origins and married to a Scottish teacher who taught French. He had bigger fish to fry. Taking the Picnic bar from my hand, he weighed it up in his hand, as if deciding what to do next.

‘Don’t they feed you enough at dinner, laddie?’ he asked, not altogether unkindly.

Corporal punishment was still allowed in schools and I was mentally prepared for more than just a verbal ticking off. He must have sensed this as he made to clip me over the ear with the Picnic bar.

‘If you keep skipping off you’re likely to get more than a hiding from just me!, he said looking at my directly. ‘No matter how fast you run!  Do you understand.’

I nodded sheepish and he simply pointed to the door and told me not to come back in a hurry.

I returned to my mates, who’d seen what had happened and pretended to act like a big hero, fronting it out with ‘Tessie’ as we called him. In reality, I was humbled and never went ‘chocolate running’ again.

As a penance, I gave up eating chocolates for Lent but didn’t tell my parents why, although all my school mates, of course knew the real reason.

So, here you have it - my memories of growing up and chocolates in the 1980s. And of course, as ever, I'd love to hear your comments, memories and your own reminiscence. Favourite chocolate bar? Do, let me know...