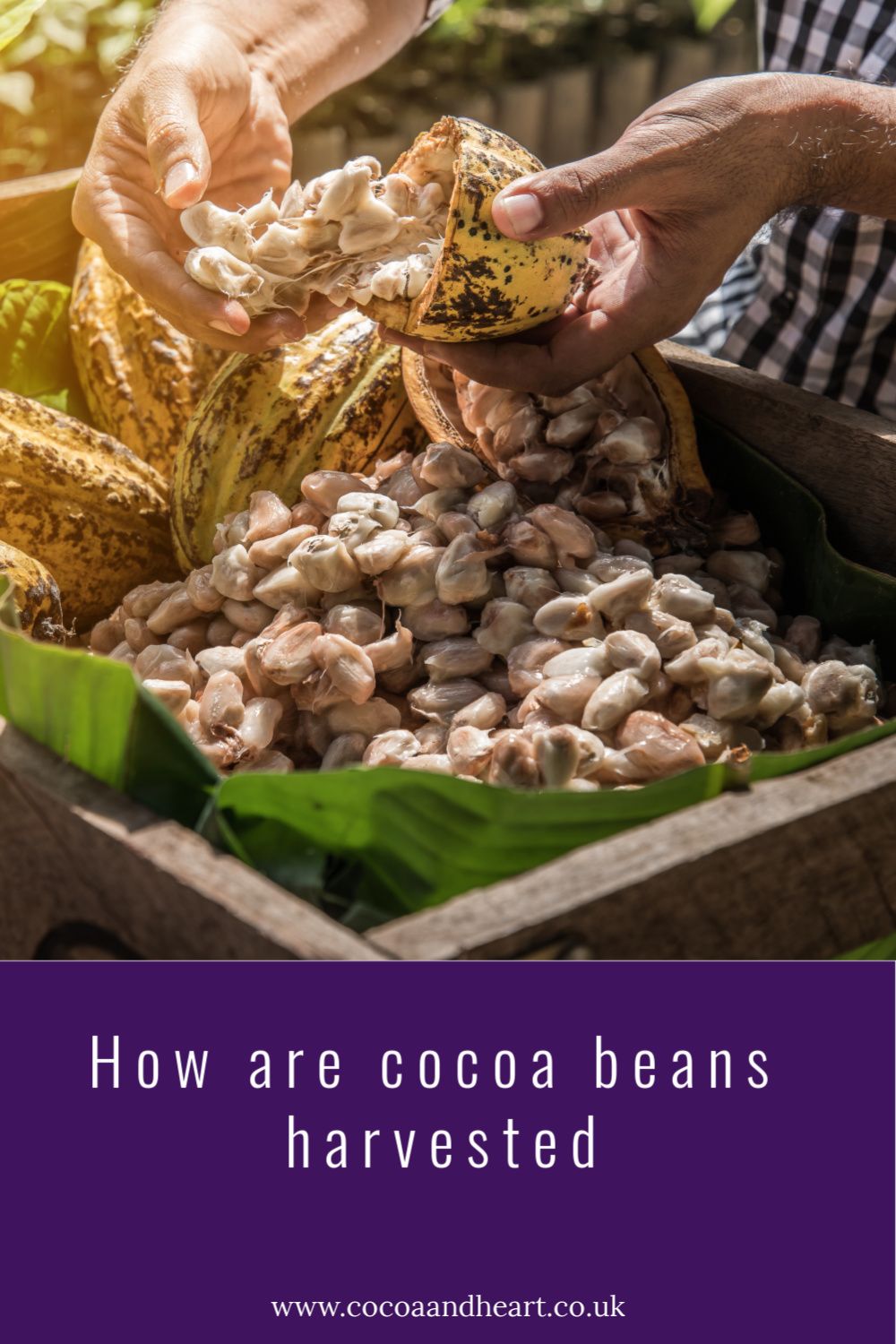 How are cocoa beans harvested? It’s a question we’re often asked, here at Cocoa & Heart by our curious and interested students who naturally want to know more about the origins of the chocolate they’re working with.

Harvesting cocoa beans is a time consuming and largely highly intensive manual labour activity where a large machete like knife plays a starring role. So, let’s cut to the chase.

The pods containing cocoa beans grow right from the trunk of the cocoa tree. This means harvesting requires cutting down the ripe pods from the trees and opening them up to remove the wet, sticky, pulp like, white beans. 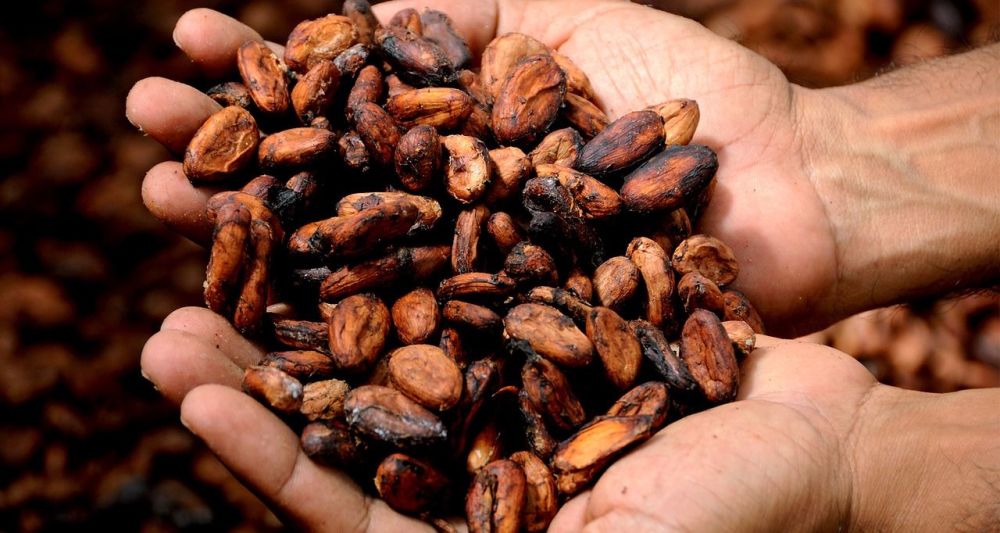 The pods are harvested manually by making a clean cut through the stalk with a well sharpened blade. For pods high on the tree, a pruning hook type of tool can be used, with a handle on the end of a long pole. By pushing or pulling according to the position of the fruit, the upper and lower blades of the tool enable the stalk to be cut cleanly without damaging the branch that bears it. 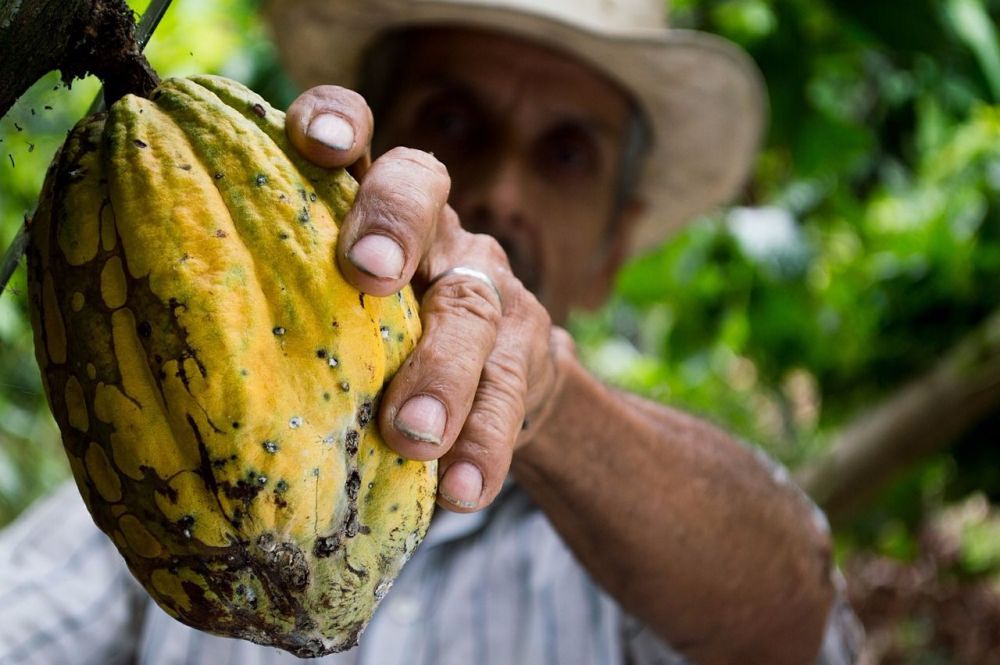 Since there are only around thirty to forty beans in a pod, it’s all done by hand. This is because it would probably take longer to transport all the pods to an automated pod cracking machine. Also, because most cocoa beans are harvested in small plantations and farmers simply don’t have the resources for larger mechanised processes.

When do the plantation farmers know the cocoa beans are ready to be harvested? The long-awaited harvest time is when plantation farmers get to find out if this season’s crop will yield good quality beans. If the pods are too ripe they are vulnerable to disease, or else the beans might start to germinate. However, if the pods are too green the cocoa beans may be of very poor quality, because they are not aromatic enough.

Around harvested time, the sight of cocoa pods ripening is a truly colourful sight. Pods vary in colour from red to purple. However, the colour of the pod is only a general guide to gauging whether it’s ready to pick. Tapping the pod is a better way of testing if the pod is ripe or not. 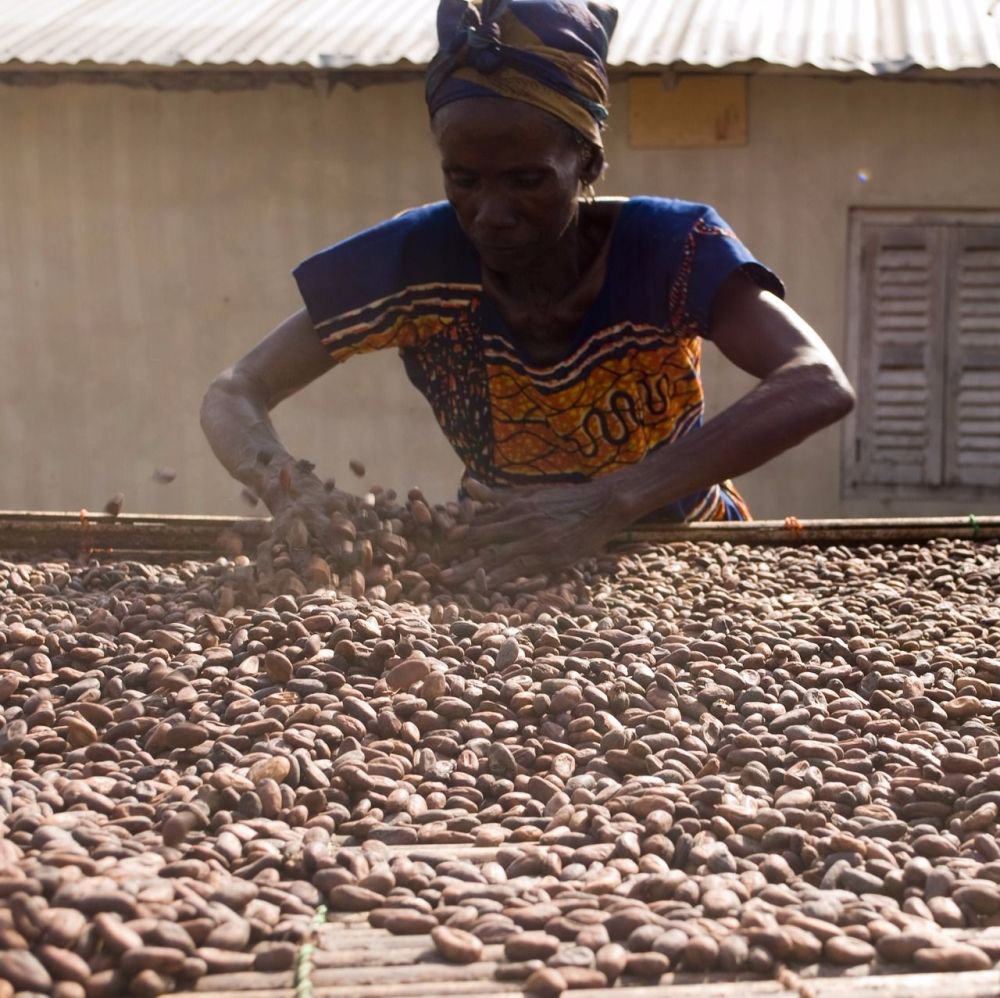 Plantation farmers are looking to hear a deep, hollow sound when they tap the pod. This is a sign that the cocoa beans are lying loose within the pod and are no longer packed tight and in an unripened state.

When are cocoa beans harvested? There are two main harvests a year which coincide with the rainy seasons; the largest, around November and then a second harvest in spring in April.

Cocoa trees do not start bearing beans until they are around three years old and with their most fertile period being between ten to twelve years of age.

Cocoa trees are very fragile and shelter under the canopy of larger trees for protection, as they can be easily damaged by the wind or burned by the sun. Not only that but when harvesting cocoa, the farmer must be careful not to damage the “eyes” on the tree from which the cocoa pods grow. That’s because it’s from these eyes that future cocoa flowers emerge, and afterwards, new cocoa pods. If the eye is damaged through the action of wind or careless harvesting, it becomes infertile, and no future cocoa pods will emerge from that site.

Cocoa plants grow best in hot and humid conditions, either side of the Equator. That means a lot of sun and large amounts of rainfall as well. The Ivory Coast in West Africa is now the largest single biggest producer of chocolate but other areas where cocoa plants grow are across Central and South America and in Indonesia. Everything from geography, to the plantation soil type, to the climatic conditions of the harvest have a big bearing on the beans and ultimately on the chocolate’s flavour.

The pods are opened to remove the beans within a week to 10 days after harvesting. Much longer and the beans will start to germinate. Usually, the harvested pods are grouped together and divided either in or at the edge of the plantation. 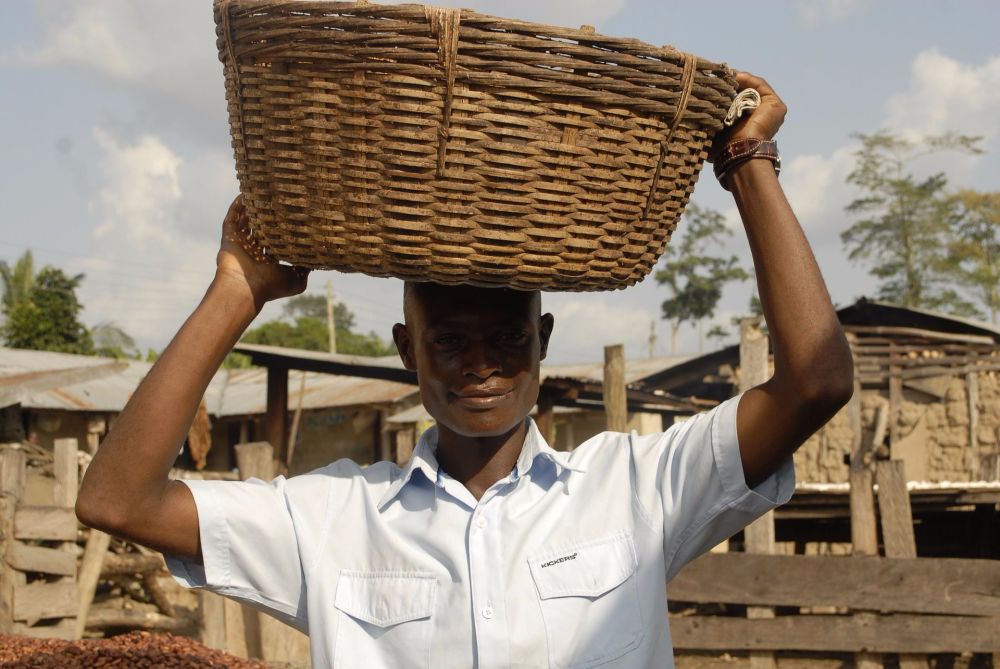 Sometimes the pods are transported to a fermentary before splitting. If the pods are opened in the planting areas, the discarded husks may be distributed throughout the fields to return nutrients to the soil, as a form of compost.

Once harvested, the beans undergo a two-stage process to prepare them for sale: fermentation and drying. How this actually happens is a subject for another blog! After this they are put into bags for delivery and export.

So, that’s how cocoa beans are harvested. And what starts out life as a bitter, white cocoa bean eventually ends up tasting like it’s Greek name ‘Theobroma Cacao’ the nectar of the gods.

We hope you enjoyed learning about how cocoa beans are harvested. If you want to find out more about where chocolate comes from, chocolate facts for kids, chocolate related recipes, you can find them on our chocolate making resource page.