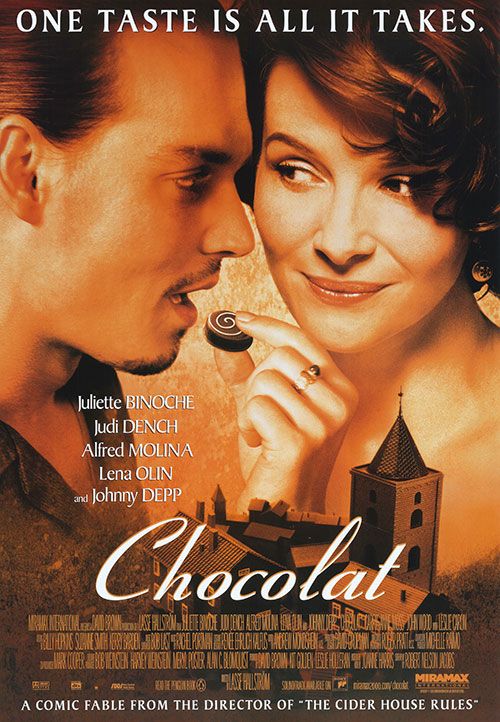 What’s your favourite chocolate treat when you go to the cinema or settle down at home to watch a film? With me, it’s a Bounty because after I’ve licked away the chocolate, I can silently slowly chew the coconut to enjoy the flavour and try to make the bar last as long as possible. A Crunchie bar, on the other hand, is just too, well crunchy, and every bite can be heard three rows back.

Buying my favourite chocolates and candy to enjoy a film or tv programme got me thinking about my favourite movies. For many of us, the cinema experience just isn’t complete without diving down into a bag of Revels or Minstrels whilst staring up at the big screen at the same time.

And then that got me thinking about those movies that feature chocolate in one way or another in the film, itself.

There may be a film out there called Chocolate Heaven (I’ve resisted the temptation to google it to find out) but in the meantime, here’s my own personal list (in no particular order) of chocolate at the movies. When chocolate moves from the back seats and up to the big screen for a starring role.

Willy Wonka and the Chocolate Factory

Author Roald Dahl apparently never really liked the original film, starring Gene Wilder. But what’s there not to like about sailing on a chocolate river through an edible candy garden where even the grass tastes delicious. Chocolate cow any one?

Director Tim Burton’s later version was more favourably received by critics, although by then Dahl had departed to his own chocolate heaven. Either film has enough sweet moments for all the family.

Chocolat (2005) was critically acclaimed by both back seat pic n mixers as well as the most fastidious chocolate truffle critic. In the film, chocolate serves as a metaphor for guilt, lust and temptation all rolled into one. Juliette Binoche is the newcomer in a small provincial post war French town, whose arrival to open a chocolate shop during Lent proves too much for the strict mayor (Alfred Molina).

With Johnny Depp as the mysterious river boat stranger, it’s a sensual feast for the eyes and a mouth-watering chocolate treat for the lips. The scene where Johnny licks his fingers while Juliette guesses his favourite chocolate is a classic. What’s your favourite?

Talking of mouth-watering moments, leads me to cast my vote for Like Water for Chocolate (1992) or Como Agua Para Chocolate, to give it, it’s actual Spanish title.

This Mexican film is a story of three daughters – the youngest Tita is forbidden to marry and must look after her mother. Instead her lover, Pedro is forced to marry her oldest sister Rosaura, but only to stay close to Tita. The two connect through Tita’s cooking and her ability to make other feel the way she does when she prepares the daily meals. It’s earthy and magical at the same time without ever being sentimental. Definitely bitter sweet but worth savouring every bite along the way.

For every sensual chocolate scene or romantic candy moment, sometimes Directors can’t resist using chocolate to get gross and gets laughs at the same time.

Co-written by and starring Kirsten Wiig, Bridesmaids (2011) was widely hailed as a breakthrough comedy that featured the fears, phobias and friendship of women – front on. But cast your mind back to the chocolate fountain scene where Kirsten Wiig loses it completely. Hands up if you were eating chocolate at the time?

Ben Stiller and Drew Barrymore starred in Duplex in 2003. It was titled Our House for UK audiences. A young couple move into their dream home only to find the kind old lady upstairs is in fact the granny from hell. Check out the chocolate choking scene when the couple try to bribe the old lady with a box of chocolates. The plan backfires in spectacular fashion when she chokes on one of them and ‘throws it back in Barrymore’s face big time.

For all the big-name stars and comedic talents of Director Danny de Vito, most cinemagoers probably thought of it as a waste of good chocolate.

Here at Cocoa & Heart we cater for children’s chocolate parties and Harry Potter is always a popular theme. So, get ready to catch a chocolate frog and rewind to when Harry and Ron first meet in a train carriage on the way to Hogwarts in Harry Potter and the Philosopher’s Stone. Definitely a wizard moment in the making. Peppermint toad, anyone?

So, what’s your favourite chocolate scene at the movies – is it candy comedy time or which romantic truffle moment truly melts your Maltesers? Does Monty Python’s Meaning of Life – ‘just a wafer more’ scene get you reaching for the chocolate sick bag or do you chuckle into your choc bars all the more?

And don’t forget to tell us what’s your favourite chocolate treat when going to the cinema or watching a film or box set at home.

Where does chocolate come from? >>

How many seeds does a cocoa pod have? >>