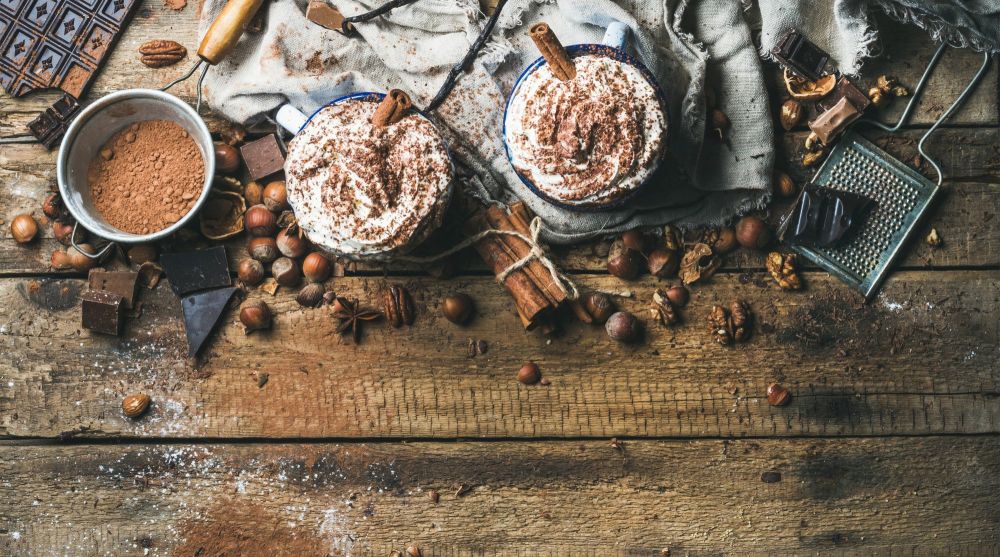 When do you drink Hot Chocolate? As a warm, comforting cup on a cold winter’s evening or as an afternoon treat with marshmallows on top, with friends after shopping perhaps? Whenever you drink hot chocolate and for whatever reason, I sure you feel better just from enjoying the rich, hot taste and savouring the relaxing feeling it often brings.

But do you ever think about who discovered hot chocolate? Or how the drink in your hands and taste in your mouth has changed a lot since it was first discovered?

It was always thought hot chocolate was first discovered and drank by the Mayan peoples of what is now Central America over 500BC. But recent research in the last year or so now puts the discovery of hot chocolate making back to at least 2,500BC and the Olmecs civilisation in Mexico.

What we now regard as a hot, smooth and sweet beverage, would then have been much more of a cold, spicy and rougher tasting concoction.

But let’s not get ahead of ourselves. Chocolate itself comes from the seeds or beans inside the pods of the cocoa plant. The beans themselves were often dried and so highly prized that they were stored and used as a form of currency.

Archaeological research indicates that the seeds were ground up with water, corn meal and other plant-based products such as maize. The mixture was then poured back and forth until the ingredients formed a foaming, thickened brew. This was then drunk cold. Chili peppers were often added, to give the drink, a spicy, bitter after taste.

So who actually drank chocolate? It appears that this spicy, cold drink was readily drank by all classes of Mayan society. Poorer people would have drunk it from rough earthenware bowls. But richer people enjoyed chocolate poured from elaborately decorated drinking vessels. These were probably status symbols – so much so that they drank from them in life and were buried with them in death. Treasured possessions, indeed.

These days tea drinkers pour over the respective merits of how long to let the leaves brew for. Mayans would have poured the cocoa drink and its many grains, back and forth endlessly, without a second thought; while discussing the harvest or the weather.

Evidence indicates that the Mayans were clean shaven, so they probably wouldn’t have literally wet their whiskers over a foaming brew; but it’s seems clear that drinking chocolate had a firm and important social place in Mayan society.

Hot chocolate is brought to Europe

The invasion of the Americas, by Spanish conquistadores, like Herman Cortes, led to cocoa beans being brought back to mainland Spain. As, the Hapsburg imperial courts of Emperors like Charles V, began to drink chocolate, it started to be served hot and sweetened.  Hot chocolate as we know it today was well on the way to being served for the refined and so refined in both its ingredients and its taste. Rich pickings, indeed.

In Northern Europe and an island sometimes called Britain, the first coffee or chocolate houses started to appear around 1690s. By this time, Britain had overseas possessions of its own in the Caribbean, such as Jamaica, which was seized from the Spanish during Cromwell’s reign in the 1650’s. But hot chocolate was still an expensive drink, for the rich and elite who consumed it ostentatiously in public with rituals every bit as elaborate as a Mayan nobleman.  Georgian society had discovered hot chocolate not just to gossip with – but to gossip over.

The addition of milk to the cocoa mass that made up chocolate gave the drink an altogether different, lighter and more refreshing flavour. This led to hot chocolate being an addition to the menu as an after-dinner drink.

The invention of cocoa powder

In the middle of the 18th century the Dutch discovered how to make cocoa powder. This enabled chocolate to be blended much easier with water and milk. But it wasn’t until nearly a century later that Joseph Fry manufactured what is now considered to be the first chocolate bar by melting cocao butter back into Dutch cocoa to form a chocolate paste which could be moulded into a bar shape.

It wasn’t long before more chocolate was eaten in a solid bar than drunk from a cup or mug.

Fast forward another century and a half and hot chocolate is approaching a new height of regaining popularity. Today it’s enjoyed in a range of different ways and flavours. Variously know as drinking chocolate or cocoa chocolate, hot chcolate can be made from shaved chocolate shards, melted cocoa or cocoa powder. It’s often made either hot milk or water. Often the milk when heated is frothy – a nod to its Mayan roots.

What is White Chocolate Made of >>

The Ultimate Guide to Ruby Chocolate >>

Viennese chocolate houses were among the first to start the tradition of using whipped cream as topping and all sorts of colourful sweets from candy to marshmallows now adorn the top of a cup or tall glass of hot chocolate.

Where hot chocolate is made from chocolate itself, rather than powder, it’s often much thicker in texture and richer in taste. So, the Spanish drink chocolate a la taza or chocolate con churros – with fried cyrated conical shaped dough topped with sugar. The thickness of the rich and intense chocolate, allows the churros to be dipped into it and stay on the dough.

Around Christmas time, gingerbread flavoured hot chocolate is especially popular; vanilla is always a favourite and cinnamon is often added for an extra warming effect. Fashions come full circle, so they say, so the trend for chilli to be added to dark chocolate to give it that extra kick, may well take off with hot chocolate. Another nod to our Mayan drinking forebears.

Over the years, various medicinal properties have been ascribed to drinking hot chocolate. It’s been advertised as a way of combating tiredness to alleviating stomach and liver problems. More modern medical research has pointed to the benefits of antioxidants in reducing heart disease. These are found in higher quantities in chocolate (especially dark chocolate) than in red wine or green tea. Similarly, the flavonoids in chocolate, help to keep our arteries healthy.

So, wherever you are, whatever the occasion and however you prefer to drink it, raise a glass (or a cup or a mug) to the rich and lovely taste of the humble hot chocolate. Delve deeper into the history of hot chocolate and you’ll find it’s full of rich discoveries – whoever actually discovered hot chocolate in the first place.

So, what’s hot chocolate’s recipe for success? Do you have a favourite hot chocolate drink or flavouring? What’s the essence of good hot chocolate? Here’s one recipe that you might like:

4 to 5 vanilla beans or cinnamon sticks, for garnish

First, heat the milk and gold top or single cream in a saucepan on medium heat to just below the simmering point.

Then, remove the pan from the heat and add both chocolates, stirring to dissolve.

Next, when the chocolates are melted, add the sugar, vanilla extract and espresso and whisk vigorously.

Finally, reheat gently and serve immediately. Use a vanilla bean or cinnamon stick to garnish each serving.

I'm off to make my own hot chocolate - until next time!