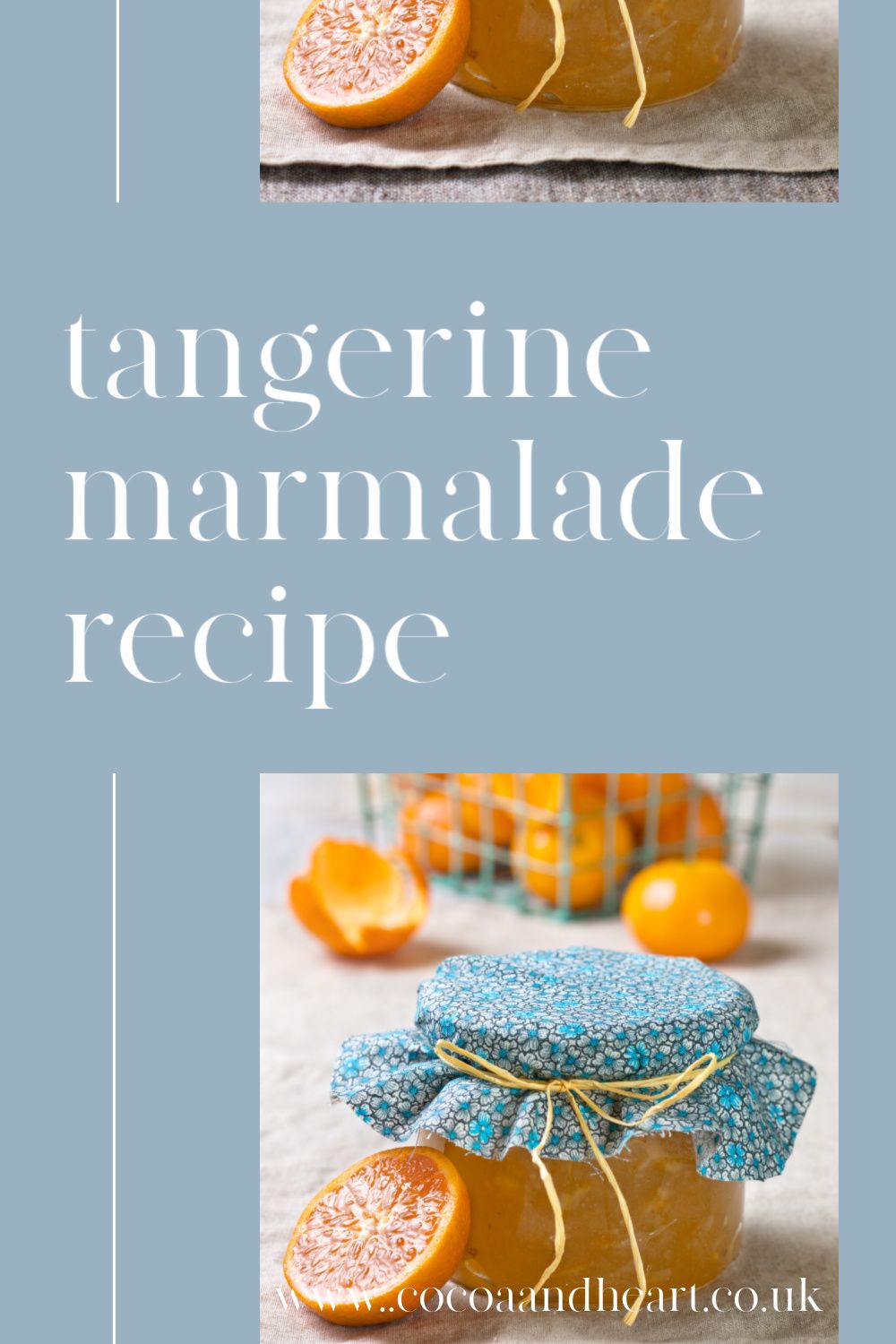 I can never resist the smell of freshly baked bread, thickly buttered and topped with marmalade. While January and February are the best months to make a proper Seville Orange Marmalade, for the rest of the year, we have to use other citrus fruits. Rather than seeing it as a disadvantage, I think it's great to experiment with different flavours and make marmalade from other fruits.

Today, I wanted to share with you my favourite recipe for tangerine marmalade. Tangerines are available throughout the whole year; they are usually much cheaper than Seville Oranges and marmalade making is much quicker, because their skin is much finer than oranges one.

Tangerine marmalade also has a much lighter flavour, and it's not as bitter as marmalade made from Seville Oranges. Some people like that, but others (like me) like the tang of traditional marmalade. This is easy to achieve by swapping one or two tangerines with a lemon or lime. The tangy lemons balance out the sweetness of tangerines perfectly.

You'll notice that I've used basic granulated sugar in this recipe and this is because tangerines have plenty of pectin in already, so you don't need to spend your money on fancy marmalade sugars. If you already have one in the cupboard, don't worry, just use it and your tangerine marmalade will set slightly quicker and firmer than mine did.

If the delicious flavour of natural tangerines wasn't enough, you could always add complimenting spice in (such as cinnamon, nutmeg or mixed spice) or add a dash of whisky. Make your recipe as described and add any flavouring after you've tested the marmalade for setting and you are ready to pour. Alcohol evaporates around 70C, so leaving the marmalade to sit to cool down for a bit it's not only good for the distribution of the tangerine rind but also for not burning out the flavours or alcohol.

First of all, wash all the tangerines and cut into thin slices, leaving all the rind on and trimming any bits that don't look perfect.

Remove any pips as you go and make sure they don't get mixed into the marmalade mix.

Place a couple of small plates in a freezer or a fridge. You will need them later on to test your marmalade.

Next, place tangerines and water in a large pot and bring to a boil. Turn down the heat to medium and simmer for about 20 minutes or until the tangerine rind (peel) is tender. You'll know when it's done because the skin will become translucent. You can also test it by eating one, but make sure you cool it down first.

The next job is to add the sugar and stir it gently until the sugar dissolves. Make sure the sugar is completely dissolved by checking on the back of a spoon. If you see any sugar crystals, then you need to leave it for a little bit longer to dissolve.

When all the sugar is dissolved, bring the marmalade back to boil and carry on cooking for about 20-30 minutes, until the mixture is thicker and slightly darker than when you started. Reduce the heat if you feel that the marmalade mixture is getting thick too quickly or running away from the pot! Stir occasionally, but don't over stir as this might crystalise the sugar. It's best not to leave the cooker while you do this, as the marmalade takes a while to get going, but towards the end, the process is very quick, and you don't want to end up with a burned mixture.

When your 'wrinkle test' comes up positive, take the pot off the heat, wait a few minutes and then add any flavours you were going to use.

Pour into sterilised jam jars or other glass containers, seal immediately and let to cool down.

If you've prepared your jam jars correctly (e.g. sterilised, airtight seal etc.) your tangerine marmalade will last easily up to 12 months (or longer).

Hope you've enjoyed making this tangerine marmalade recipe and I look forward to hearing from you if you have any questions.

Happy marmalade making & until the next time...
Magdalena

How to Set Marmalade >>