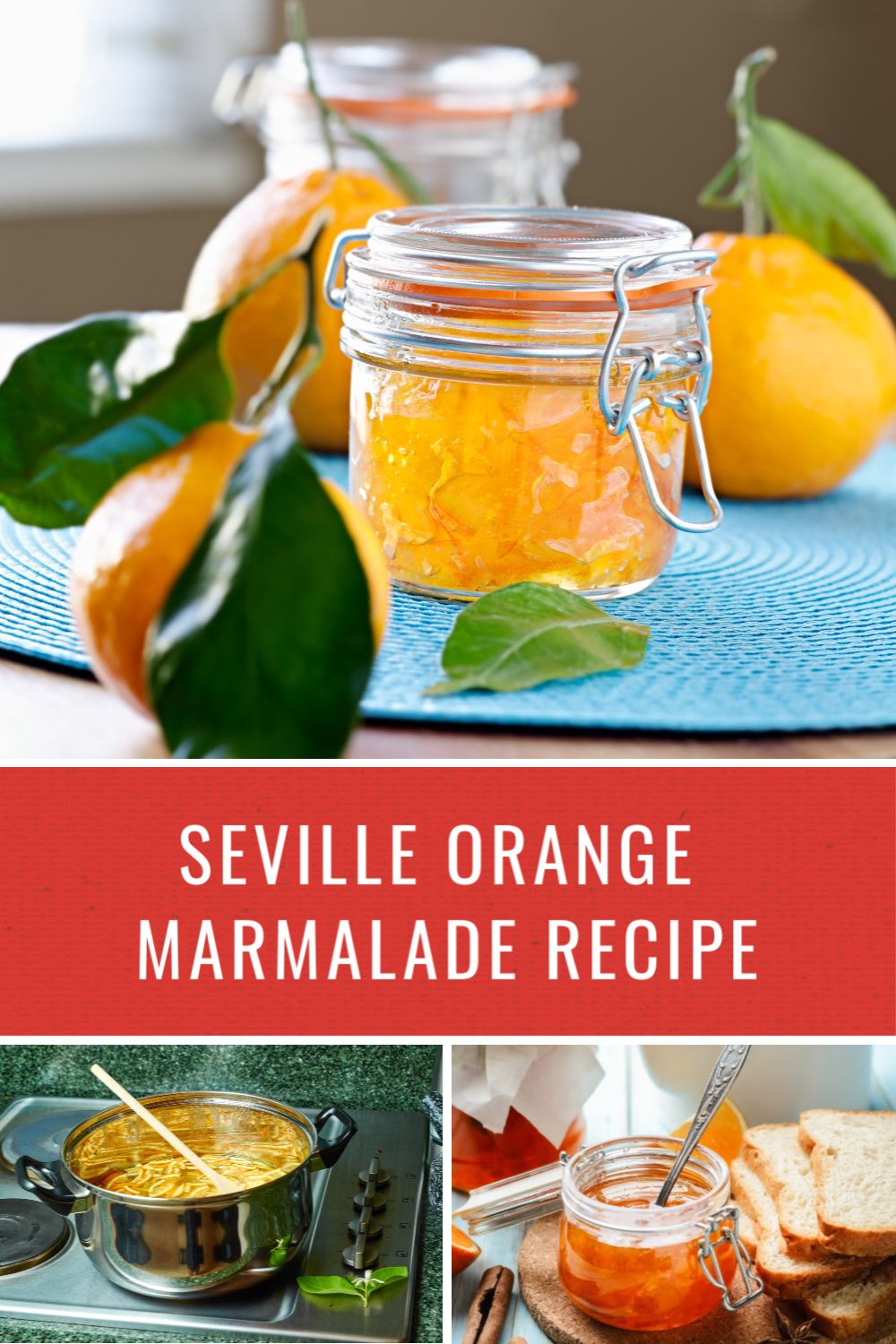 I love that once one festive season finishes another one starts! There is something comforting about spending an afternoon making marmalade, whilst it's cold and rainy (mostly!) outside. I love deciding on my marmalade flavour, experiment with different types of fruit and finally baking my own bread and butter to taste the marmalade when it's finished. A total bliss!
Every year I find myself putting in my diary 'marmalade making' dates to make sure I don't miss the short Seville orange season. I always buy more than I need and freeze some oranges for later.

How to Make Sure your Marmalade Sets Perfectly >>

Over the years I find that most recipes make large quantities, which are quite difficult to make without a proper muslin pan (e.g. a large pan specifically designed for marmalade & jam making, which has a slightly tilted top inwards to prevent the marmalade overboil). That is why today I want to share with you a Seville Orange Recipe that fits comfortably into a large saucepan or a soup pan. Obviously the bigger pan you use, the better to make sure that you don't end up with a burned marmalade on the top of your hob.

The Seville Orange Marmalade also has a wonderful story behind it and a creative woman who made a success out of a fairly desperate situation. The story goes that in the early 1800s a Dundee grocer Mr Keiler ordered a huge quantity of oranges, which were too bitter for people to eat and nobody wanted to buy them! His wife decided to create something out of these bitter oranges and boiled them into a marmalade! Her discovery was a great success and they were able to make their money back from buying the wrong oranges. And what's more Seville Orange Marmalade is one of the most popular types of marmalade made in the Great Britain.

The first step (at least 24 hrs before you want to make your marmalade)
Make sure you wash your fruit first and use oranges closest to the 500g. I find that this is only about 3 medium oranges, but it depends on the size.
If you prefer your marmalade to be zingier, use a whole lemon, or just half a one or a small one.

Cut all the fruit lengthways in quarters and using a spoon scoop up all the pith and collect all the orange pips. Keep any orange juice for later.

Cut all the orange peel in either thin slices or thick ones, depending on what you prefer. This is a fairly tedious job, but I find that doubling up the orange quarters (sort of stocking them up) and then cutting them, saves a bit of time.

Tie all the collected pith and pips into a muslin bag and place to a non-iron or steel bowl (I use a large plastic bowl), with the water and the thinly shredded peel. Cover and leave for approximately 24 hrs to ensure that the pectin is released and your marmalade sets well in the end.

Second step - the next day
The next day, transfer the marmalade mixture to a large saucepan and on a medium heat simmer gently until the orange peel is soft and the water content is reduced by about half. You can test if the peel is right by tasting it. The orange peel will also look slightly see-through and will sort of go more opaque.

When the peel is soft, check that you have about 500ml of water/liquid left. If not, simply top up the water with more water or the orange juice you collected yesterday.
Take out the muslin bag with orange pips and discard.

The next step is to add the sugar and let it dissolve properly. Check on the back of a soup spoon that all the sugar crystals have dissolved before you move to the next step.

Once you are satisfied that your marmalade will reach the setting point, take it from the heat and leave it to stand for about 10 minutes. This will help to distribute the orange peel more evenly once potted.

Divide between 4-5 jam jars, seal and let to cool down properly before storing away in a dark, cold place. Use within 12 months (or two years maximum).