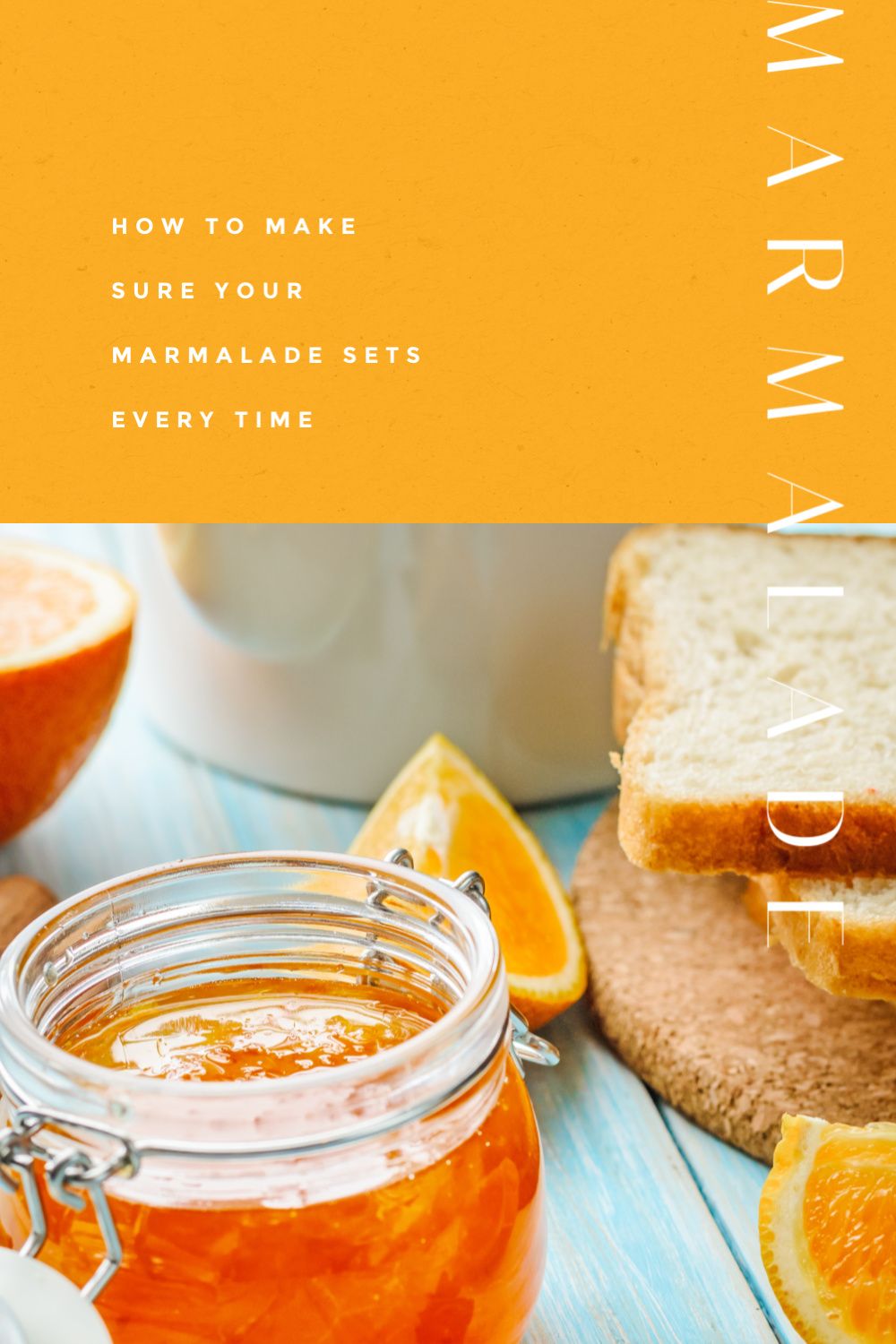 How to achieve the perfect marmalade set is probably the most frustrating thing about marmalade making. So, here are my answers to questions you are impatiently want to know.

What is the setting point for marmalade?

This is a 'range' because every kitchen environment is very different and the setting point depends partly on the humidity in the room. The higher the humidity the higher the temperature needs to be for the marmalade to set. To control humidity, open window, switch on fan or put the heating on, depending on the season.

Make sure you have large saucepan or wide stock pot. The large the surface of the marmalade liquid the quicker the water evaporates, which means that the setting point is reached quicker.

Another thing to bear in mind, is not to keep stirring the marmalade once the sugar is added as it will cool the marmalade and setting point will be difficult to reach - just stir occasionally to prevent sticking.

How do I set my marmalade?

First of all the marmalade first need to reach about 105C. It's always very quick to reach about 100C (which is boiling point for water and most liquids), but it surprising takes quite some time to reach that extra few degrees.

The volume of liquid (before you add sugar and start boiling all the mixture) should be about 2x the amount of the original weight of your fruit. If you follow your recipe, you would have already measured your liquid as you go, but sometimes you might have less or more, so it's always worth measuring your liquid before you start boiling.

Always do the wrinkle test after your marmalade reached the setting point. Turn off the heat, add a spoonful to a cold plate (make sure a stack of plates is available in the fridge for you to use as you test your marmalade) and leave it to set for 5 minutes in the fridge. If the mixture sets and when you run your finger over the surface it crinkles and it feels slightly hard, you are on to a winner! You know that the rest of the marmalade will set too and you are ready to pot your marmalade up.

If not, don't worry, just bring the marmalade back to boil and boil for another 5 minutes. Test again.

How to fix marmalade that didn't set

First of all you need to be absolutely sure that your marmalade is not going to set. It can take up to 24-48 hours to set properly. This is because pectin can take that long to develop firm  set.

Make sure you are using wide large pan (rather than tall slim pot). The large the pot, the wider the area of the marmalade mixture, which helps with boiling down and reducing (evaporating) the marmalade to perfect thick texture.

You can re-boil and re-set your marmalade at any point, even if you've originally made the marmalade few days ago (as long as your jars were sealed properly)

If you don't have powdered pectin, you can also use a liquid one (just make sure you measure the amount correctly) or add a fresh lemon juice.

There is another way of re-making runny marmalade. Instead of thickening the marmalade by  re-boiling it, pour the marmalade to a large baking tray and place in the oven on low heat (about 100C) for an hour or two. This will help to evaporate some of the moisture from the marmalade, concentrate the flavour and reduce the volume without re-cooking. This works brilliantly with more delicate types of marmalade, like tangerine marmalade, where you want to make sure that the marmalade is nicely translucent even after the re-boil.

How long does marmalade take to set?

Marmalade can take up to 24-48 hrs to set. This is the lenght of time that it takes for the pectin to fully develop and set. Sometimes it can take up to few weeks to achieve the perfect set. I had once a batch of marmalade which didn't set and as I didn't have the time to re-boil the whole mixture, I've left it for few weeks. When I finally got round to sort out the marmalade, I found it perfectly set! Mystery of a pectin, still puzzles me... If you are not sure whether your marmalade has set, wait 48 hrs before you re-make or re-boil your marmalade.

Do I need to add lemon juice to my marmalade?

What type of sugar do I need to set my marmalade?

Citrus fruit is naturally high in pectin, which means that normally there is no need to add extra pectin. Most of the time I use just ordinary granulated sugar. But you can also buy preserving sugar, which has much large sugar crystals and it's specially formulated with addded pectin to ensure perfect set.

The level of pectin in each batch of fruit (or each fruit) can vary, so if you are completely new to marmalade making, try the preserving sugar (you can normally find it in large supermarkets in the same place as normal sugar). It's slightly more expensive than normal sugar, but you should achieve perfect set every time. It's also worth noting, that Seville Oranges are the highest in pectin, whereas sweet orange or tangerines are in comparasion lower in pectin.

Oh, an another thing....Don't be tempted to use less sugar than the recipe indicates (this is usually double the quantity of the original weight of your citrus fruit. The volume of sugar is absolutely necessary to ensure perfect set. If you add in less you'll have problems with setting your marmalade.

That's it for now, but do let me know if you have any other questions about marmalade making and I'll do my best to answer them.