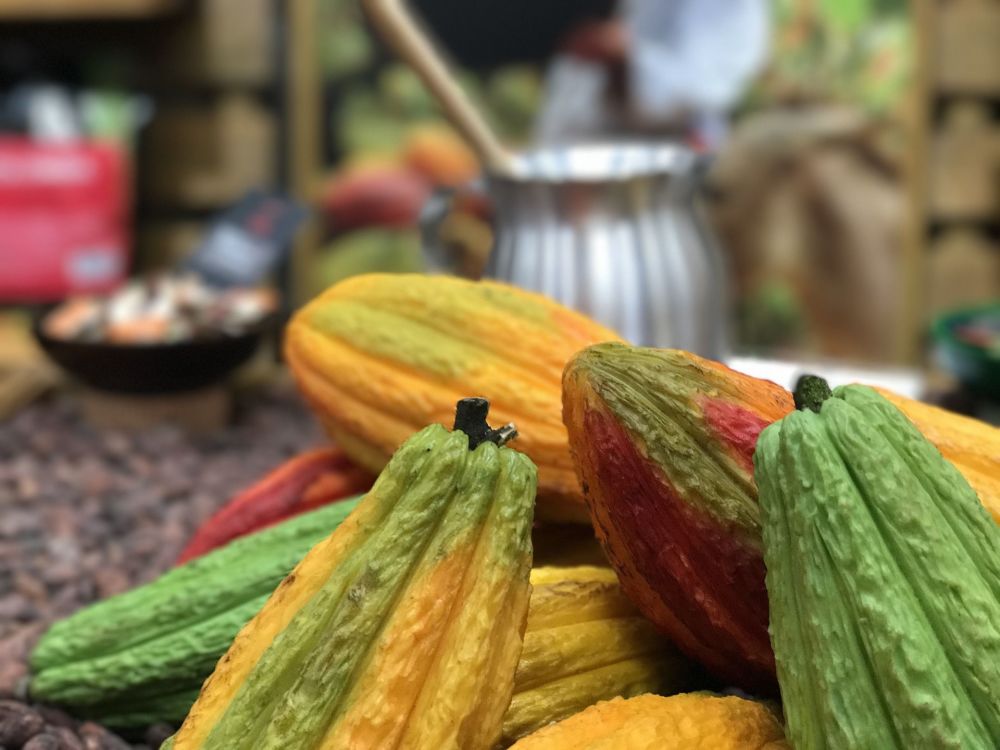 When we’re running our various chocolate making courses we often  get asked lots of questions from enthusiastic chocolate makers about every aspect of the chocolate making process. And, of course, it’s a pleasure to share our knowledge with so many keen and eager course attendees and chocolatiers to be. Sometimes the questions are technical and detailed– such as those about the tempering and the chocolate crystallisation process. Others are more general, but equally practical, like when do we get to eat it all?

So, we thought it would be both fun and informative to go behind the scenes as it were and tell you a little bit more about the wonderful world of chocolate.

We’re going to kick off with a good opening question which was actually asked at one of our chocolate making hen party.

The definition of cocoa bean

Let’s start with a definition.

Cocoa bean (also cacao bean,[often simply cocoa and cacao; Mayan: kakaw; Nahuatl: cacaua) is the dried and fully fermented fatty seed of Theobroma cacao, from which cocoa solids and cocoa butter are extracted. They are the basis of chocolate, as well as many Mesoamerican foods such as mole sauce and tejate.

A cocoa pod (fruit) has a rough leathery rind about 3 cm thick (this varies with the origin and variety of pod). It is filled with sweet, mucilaginous pulp (called 'baba de cacao' in South America) enclosing 30 to 50 large seeds that are fairly soft and white to pale lavender in color. While seeds are usually white, they become violet or reddish brown during the drying process.

The Cocao plant is thought of as a fruit plant. The bean itself is a seed and a seed technically is a nut. So it comes from the nut inside the fruit.

So, is cocoa a fruit? Yes, it is, rather than being a vegetable. But one good question leads to another. We’re all familiar with cocoa beans and now know we know a little bit more about the cocoa pod and its seed, it’s time to learn more about the precious life of the Cocao Tree from where it comes.

What temperature chocolate melts at? >>

So, it’s the fruit of a bean of a seed that comes from a nut! Well, don’t blame us, you asked the Question !

There are three major varieties of cacao grown in the world: forastero and trinitario and criollo. All fall under the species of Theobroma cacao and each is grown in different areas. But more of that later.

Cacao comes from the cacao tree, which is very difficult to grow. It only bears fruit inside the band of 20 degrees north and 20 degrees south of the equator. But even within this band of the tropics, the tree will not grow if the altitude is so high that the resulting temperature falls below 15° Celsius (60°F). Cacao also needs year-round moisture. Poor growing conditions make it even more susceptible to a multitude of diseases. On the other hand, when conditions are perfect for the tree, the seeds will sprout in a few days and the tree will start bearing fruit after four years.

Interesting facts about the cacao tree

When cacao leaves fall to the forest floor, they mix with the leaves of other plants and decay. Fungi and other organisms decompose this debris, which are going to feed the soil with essential nutrients, thus fertilizing the tree. In addition, decaying leaves provide the perfect breeding ground for midges, the tiny insects that pollinate cacao flowers.

So now we know more about the cocao tree let’s get back to the cocao pod itself.

To re-cap; is cocoa a fruit? Yes, cocao pods are the fruits of the cocao tree. The ripening process whereby pollinated flowers mature into the oval ribbed shaped fruit takes up to 5 months. Flowers and pods appear on the same tree at the same time It can take about 10 pods in order to produce just one kilogramme of cocoa paste. A variety of seeds, such as theobromine which has similarities to caffeine, combine to give the seeds their bitter flavour.

So we know a bit about the cocao tree, where its grown and the pods and even the flowers and leavers. But let’s get back to the cocoa beans and the three main varieties of beans; forastero, criollo and trinitario.

How much of each cocoa variety is grown?

80 to 90% of the cacao grown in the world is of the forestero variety, due to its resistance to disease. In 2010, approximate 3.5 million metric tons of forestero were harvested worldwide. Only about 5% of the world crop is criollo beans, which are the most prized for their more delicate flavor, though they are harder to grow. Trinitario beans, which make up the remainder, are a hybrid between forestero and criollo and have good qualities from both.

What are the qualities of forestero cocoa beans?

Forestero beans likely originated in the Amazon area of South America. The pods are usually yellow and the beans have a flat shape. As the hardiest variety of cacao, they were domesticated and are widely grown in South America and West Africa.

Tasting notes for the varietal characterize it as lower in acid with earthy notes. It’s often used for blending due to its full flavour. Though much of the cacao grown is of lower quality, it is serviceable for commercial grade chocolate and baking applications. However, some forestero, especially that grown in Sao Tome and Ivory Coast have more complex and prized flavors.

What are the qualities of criollo beans?

Criollo beans are the most prized. The pods are yellow or red and the beans, are large and white. The variety was likely the first variety cultivated by the Maya, likely in the area now known as Colombia.

In the mid 1800s, nearly all of the cacao harvested in the world was of the criollo variety, but its delicate temperament was its undoing. It is still among the most prized and single origin beans from Venezuela and Madagascar are some of the most sought after. It is described as having a sweet aroma with a delicate well-balanced taste.

What are the qualities of trinitario beans?

Trinitario beans are a hybrid of criollo and forestero beans. The pods can be red or yellow and the beans round or flat. They were named from their origin, Trinidad, where they naturally cross-pollinated in the 17th century. They are not widely grown, but have some of the better resistance and yields of forstero with the more rounded flavors of criollo. It’s favour can be fruit and spic and sharp with a slightly acidic aroma.

Are there other varieties of cacao?

There are other varieties, but they are not widely grown commercially and not well known outside of the small plantations or origin areas. More recently research institutions, cocoa growing countries and chocolate manufacturers have taken an interest in discovering these lost varietals in hopes of creating new cultivars that will be more pest resistant and/or bring higher yields.

What is the future for cacao growing?

As work continues on analysing cacao varieties and wild plants Central and South American, more varieties may be isolated. As cacao is vulnerable to many different pests and diseases and is difficult to grow, creating and encouraging more varieties may help cacao thrive in the next centuries.

Back to the Question; Is Cocoa a fruit?

So we started with the question; is cocoa a fruit? And look just where that got us!  We’ve already taken a round the world tour in search of where the cocao tree is grown. We’ve touched on the cocoa pods and the beans and seeds themselves as well as the flowering process that sees fewer than 5% of cocao flowers pollinated.

But the cacoa tree has a trick up its sleeve. When the monkeys, birds and other animals break open the pods to eat the sweet white pulp inside that surrounds the seeds, they spit out the bitter tasting seeds. That way the seeds manage to reach the floor of the forest and have a chance of pollinating and sprouting to new trees.

Well there you have it - our fabulously comprehensive answer to one curious question! Next time I want to dive in more into the world of chocolate and explore how different chocolates taste. I'm proud to say, I'm the chief taster for all chocolate that we use for our handmade chocolates.

As ever, I've enjoyed writing this blog post for you, so leave me a comment and fell free to share this article with your friends. I look forward welcoming you to one of our chocolate workshops in near future.

Until the next time - keep eating chocolate and have some fun! 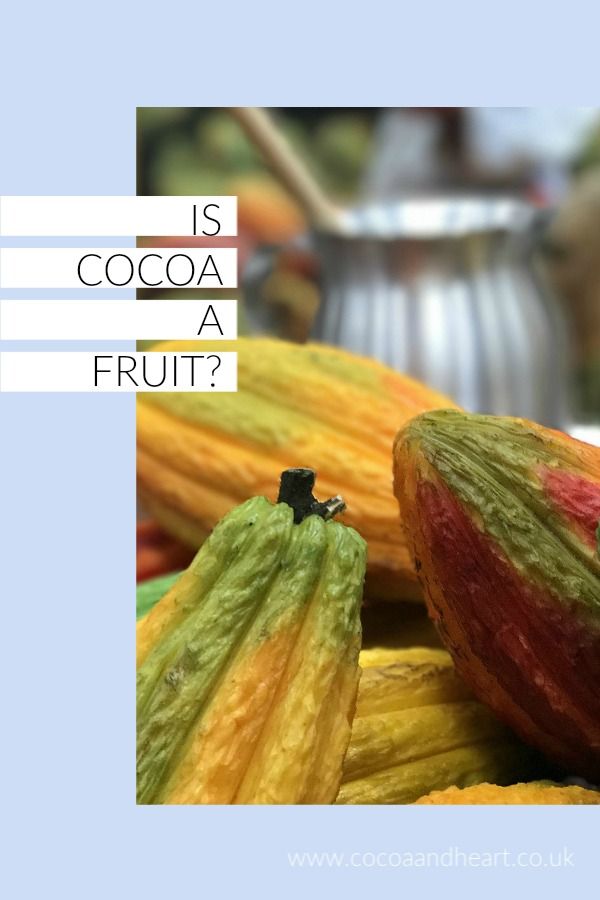